Under the soil, trees and fungi connect together, sharing resources and messages. In healthy forests, trees can protect each other by warning of impending disease. But in mono-crop plantations, they cannot.

As we move into the third decade of the 21st Century, many people are reconsidering how we live together. Can we find a posthuman future? Can we learn to depend on one another, and on our surrounding environment, mutually?

This is a project about networks, in forests, communities and technologies.

Sign up to e-newsletter for this project (max. 2 emails per month)

A new project began in January 2020, which included a planned residency at Kielderhead Wildwood Project, Kielder, UK. The residency is part of the Visual Art in Rural Communities residency programme ENTWINED: Rural Land Lives Art. The one-month residency will see new research into forest networks and how trees communicate, and a comparison with community and digital networks. A regular series of video posts, and a selection of installations built on-site will complement this documentation. The residency was postponed due to the COVID-19 pandemic lockdown restrictions. It will now take place in April 2021.

This project will conclude the five year long Antikythera Etc., and will contribute new works to the project Solastalgia.

Supported by the Arts Council of Ireland Travel & Training Award.

A series on the idea of networks, looking at the discovery of the "wood wide web", or how trees communicate with each other, and drawing this together with communities of people and digital networks online. Influenced directly and concequentially by the COVID-19 pandemic. This project was due to be carried out during a residency at Kielderhead Wildwood Project, Northumberland Wildlife Trust (UK), with Visual Arts in Rural Communities , but was postponed due to the pandemic restrictions on travel.

The videos were made during social distancing, while research for the project continued (March-June 2020). The link between communication and isolation became part of the project.

Videos from the series Never Just a Tree can be viewed on VARC's Vimeo channel linked to the above image.

The title of the series is taken from a personal communication with Professor Lynne Boddy, Biosciences, Cardiff University. She was explaining that we need to look at trees in the context of all of their surrounding environment, not just as standalone objects.

The final artwork in the series Antikythera, Etc. was created in October 2020. This 5-year project comes to an end, and a new beginning, in the Wood Wide Web project.

View a video of this project below:

artwork #3the power of inconspicuous things

An interactive installation that invited audience members to plant tubes of light and activate a mycorrhizal system of lights below, inside a completely dark room. The tubes acted as torches, allowing audience members to make their way through and explore other artworks that were dotted around the space.

artwork #5the planting of varda wood

On May 4th 2021, Varda Wood, a stand of 20 birch trees, was planted with Kielderhead Wildwood Project. Joined by artist Catriona Gallagher and facilitated by Tash Hemsley and Graham Holyoak at Kielderhead Wildwood Project, we braved the wind, rain, hail, snow and sleet to plant the wood and named it in honour of the recently deceased filmmaker Agnes Varda, who brought us all together so often.

The overall project is accompanied with text pieces that I am creating from the research that is being carried out.

The writing supplements the artworks, and documents the networks that were formed in the process of making the project. 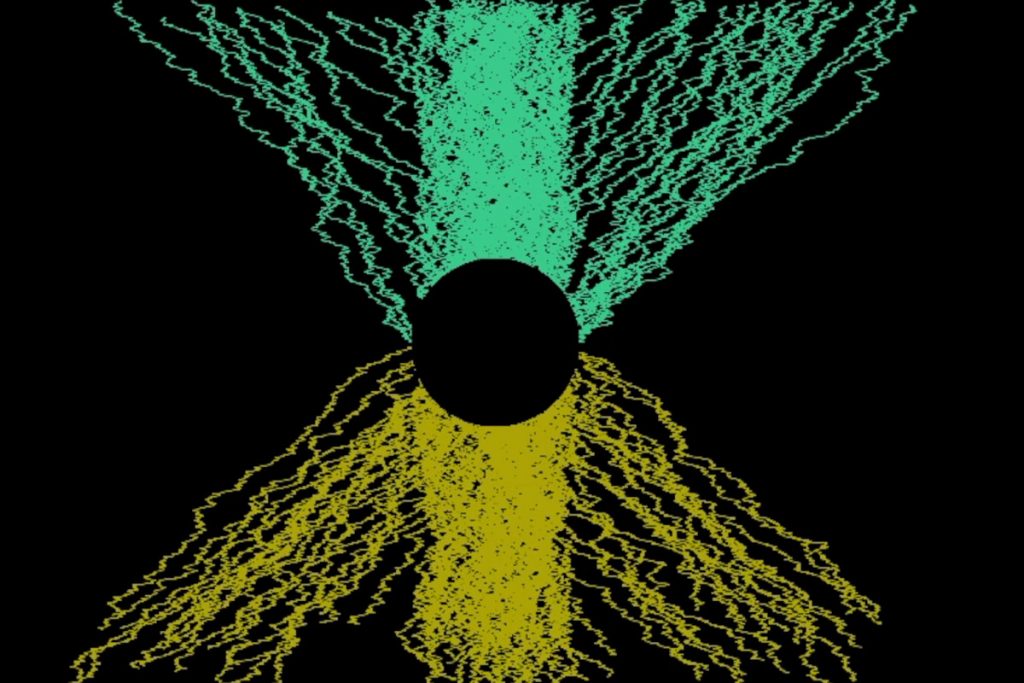 
With all of our technologies to communicate and demarcate, we try to distance ourselves from these species, these places, these 'others' that we see as unlike ourselves. And yet, time and again, we fail in this distancing.

To build a network is to build a future. The idea of grievability, of grief in the future tense, requires enough imagination to see beyond today and to create a place that has value enough to be grieved.

the opposite of an echo

Drawing from the research on this project, I have created a triptych of web-based artworks about trees, growth, hope, community and collaboration. These are linked in the images below. All of the photographs have been taken on-site at Kielderhead Wildwood Project, Kielder, UK during a residency in April 2021.

the opposite of an echo

child of a shout

Part of the process in this project is trying to engage an alternate online community, outside of those represented by the mono-culture of centralised online platforms.

To this end, I have contacted many of the activists and engaged people on my 'community' list, and here I document some of the interactions I have had.

Note: The Fediverse is a collection of online, open source platforms for social interaction that operate outside the mainsteam platforms like Google or Facebook. Most of the platforms that I explore here are part of the Fediverse.

Note 2: I am absolutely not a supporter of technological utopia, but do believe that there are good ideas in technology, and want to explore these toward a better, and more mutually connected future. This includes ad-hoc, community led networks, and online platforms for sharing and information.

Using the online platform Mastodon, I carried out a Socratic Dialogue about the strengths and weaknesses of peer-controlled social networks.

The following link shows the full conversation, including a range of participants from different backgrounds: view here.

The Socratic Dialogue asked the question: "How to avoid an echo chamber...Is there a danger of exclusivity?", referring to the peer-controlled networks of the Fediverse.

The answers spawned the following list of results from the continued questioning:

I have built a blog on Pleroma, and a connected server, using Raspberry Pi and following this guide. This will be used later in the project, when I begin documenting the development of the interactive artworks once I arrive at Kielder.

I have ongoing profiles on Mastodon, PeerTube, Scuttlebutt and Diaspora; the latter has been active since 2013.

I work with open source technologies, including Raspberry Pi and Arduino, and will use these in later parts of this project/

Probably the most important part of this project is the dialogues that are happening with people directly involved, and with people outside the project.

The community and volunteers at Kielderhead Wildwood Project are supplemented by an online community and a community of experts, all of whom have been part of my ongoing dialogue, supporting this project with their time, expertise, and engagement. I list here the people who I have been lucky enough to speak to, work with, or communicate with in another way and who are influencing the project as it continues.

My thanks and love to all!

The other VARC resident artists:

Experts that I have reached out to: